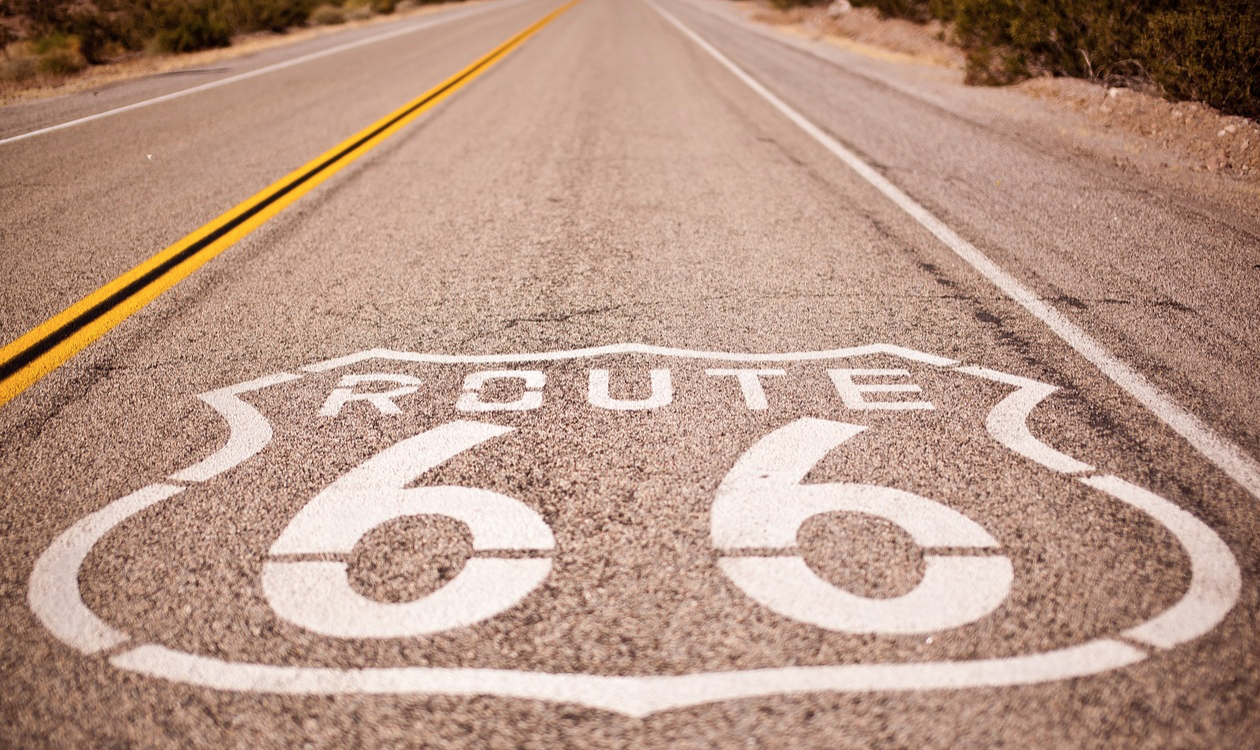 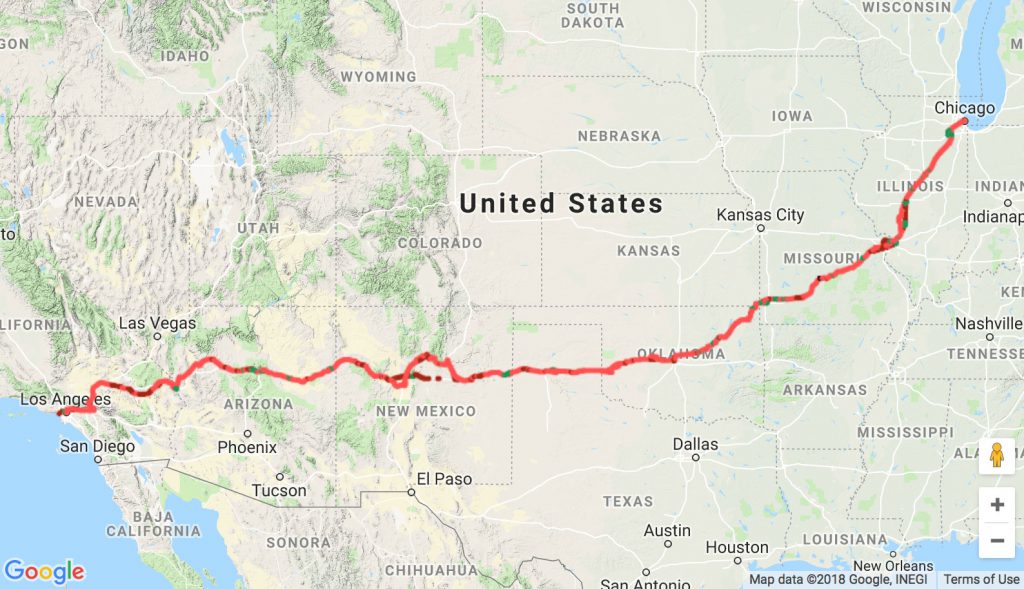 Route 66 in the United States is one of the most famous highways on the planet.  An embodiment of freedom and roadside America, it served decades as a critical artery between Chicago, Illinois and Los Angeles, California.  Have you ever wanted to travel and learn about the famous Route 66?  If so, read on!

I’m planning to drive Route 66 from Chicago to LA this summer.  In preparation for the trip, I’ve bought several books, read numerous articles and blogs, and have started doing my own research along the route.  This blog is a summation of what I’ve found so far.  Just the tip of the iceberg so they say.

Stretching more than 2,400 miles, the route showcases a cross-section of the nation from the skyscrapers in Chicago, through the green hills of Missouri, the grassy plains of Kansas, Oklahoma, and Texas; the deserts and mountains of New Mexico, Arizona, and California, all the way to the sprawling city of Los Angeles & the Pacific Coast.  It represents a wide variety of American landscapes.

Filled with memories and nostalgia, Route 66 is an American icon of days gone by.  It has witnessed the rise and fall of many American institutions and played a part in America’s darkest and happiest times.  Let’s explore its history to better understand the significance of traveling this road. 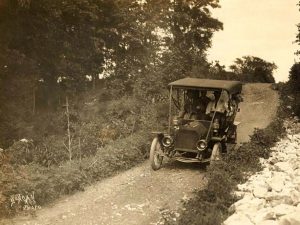 US-66 was born, along with all the other US highways, in 1925 as part of a U.S. Bureau of Public Roads committee chaired by Cyrus Avery, a Tulsa businessman.  Cyrus, along with state officials along the route, sponsored the highway to connect Chicago and Los Angeles.  Like other highways, the route was largely defined by connecting existing road networks.

Originally, Cyrus wanted the route to be named US-60.  Along with designating the new highways, the committee had defined the numbering convention as even numbers for east-west roads and odd numbers for north-south roads with the ‘most important’ roads ending in either a ‘0’ or a ‘1’.  The US-60 designation was a year-long controversy with officials in Kentucky who wanted their main highway to have that name.  Finally, Cyrus decided on US-66 and in 1926, the official improvements began.

Marketed as ‘America’s Main Street’, the route became a popular transcontinental route, offering better weather than other east-west highways.  Passing through rural America offered farmers the opportunity to transport their harvests and its diagonal configuration from Chicago’s shipping industry to the Pacific appealed to the growing trucking industry.

Route 66 became the ‘pathway to opportunity’ for thousands of people fleeing the Dust Bowl of the 1930’s.  John Steinbeck’s classic 1939 novel, The Grapes of Wrath, coined the phrase, ‘The Mother Road’, immortalizing its importance to this era.  The increased traffic brought growth of new businesses along the route that wouldn’t be fully paved until 1938. 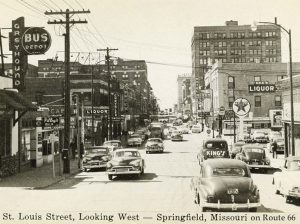 At the start of WWII, Route 66 became a military conduit, transporting troops and supplies all along the path.  The wear and tear of the road from all of this heavy machinery highlighted the need for a limited-access ‘superhighway’ system that, ironically, was actually the beginning of the end for Route 66.

After the war, the uptick of prosperity and tourism drove an explosion of gas stations, roadside attractions, motor courts, diners, and motels dishing out home town hospitality to thousands of travelers.  Songwriter Bobby Troup & Nat King Cole recorded rhythm & blues hit, “Get Your Kicks on Route 66’ in 1946, and the TV Series, Route 66 ran in the 60’s spurring on even more exposure.

The 1955 Interstate Highway Act sealed the fate of Route 66.  The new, limited access ‘superhighways’ displaced and swallowed a lot of the most traveled original US highways and the towns that had blossomed around them.

Route 66 was affected more than others.  It had essentially ceased to function as a US highway by the end of the 1960’s, just 15 years after the new construction began and was officially decertified in 1985 after a bypass was built around Williams, AZ, the final holdout.

Efforts to preserve Route 66 began with the establishment of the first Route 66 Association in Arizona in 1987.  Later that year, Arizona designated the route between Kingman and Seligman a “Historic Route 66”.  All eight of the US Route 66 states 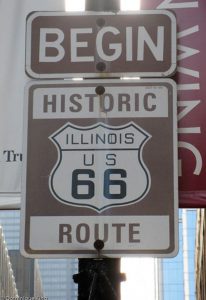 The associations are registered as non-profit organizations dedicated to educating the public via newsletters, promoting the use of the route via travel guides & maps, and protecting & preserving the historic properties along the route.

In 1995, David & Mary Lou Knudson founded the National Historic Route 66 Federation, working with senators & representatives from New Mexico to provide a fund $10 million in matching grants for projects dedicated to preserving or restoring historic properties along Route 66.  The National Route 66 Preservation Bill was passed in 1999 and is administered by the National Park Service.

But funds were only a part of the story, the Federation also launched a worldwide campaign to turn the route into a travel destination, driving tourism to patronize the businesses and help them thrive.  It is estimated that up to 40% of the travelers on the route come from outside of the US.

The Federation, which has since converged with the Route 66 Alliance, also had two programs to help in maintaining interest in preserving the route.  The John Steinbeck Award is presented to individuals who contribute significantly to the preservation of the route.  The award event has evolved into 3-day community wide celebrations that bring enthusiasts together from all over.

The ‘Adopt-A-Hundred’ program allows individuals or groups to adopt 100 miles of Route 66 to investigate their section once a year for preservation problems, review the dining, lodging, and entertainment businesses along the way, and provide input into the grant proposals and travel guides for that section.

So, with all of the downfall and preservation activities, what is there to really see and experience today in 2018?  There is plenty!  And, if you go, you will play your part in helping to preserve this historic route by providing the most basic thing – business!

Here is just a bit of what I will be researching and blogging about next!

As you can see, there is a lot more to research and discover about Route 66!  The challenge will be (as always) to decide what is ‘must do’ and iterate from there.  It will also be tempting to veer off the path given all of the scenic areas we will go through, but there’s always the way back for that!

If you’re interested, a great place to keep up on what’s happening on all things Route 66 is here.  Now, go forth, be a tourist, and patronize The Mother Road!  Stay tuned for more blog posts on everything it has to offer!

If you’re planning a Route 66 road trip and are looking for some more recommendations  or a step-by-step plan, let us know by contacting us here!

As always, Thanks for Reading!

Kristi, aka The Trippy Tripster! 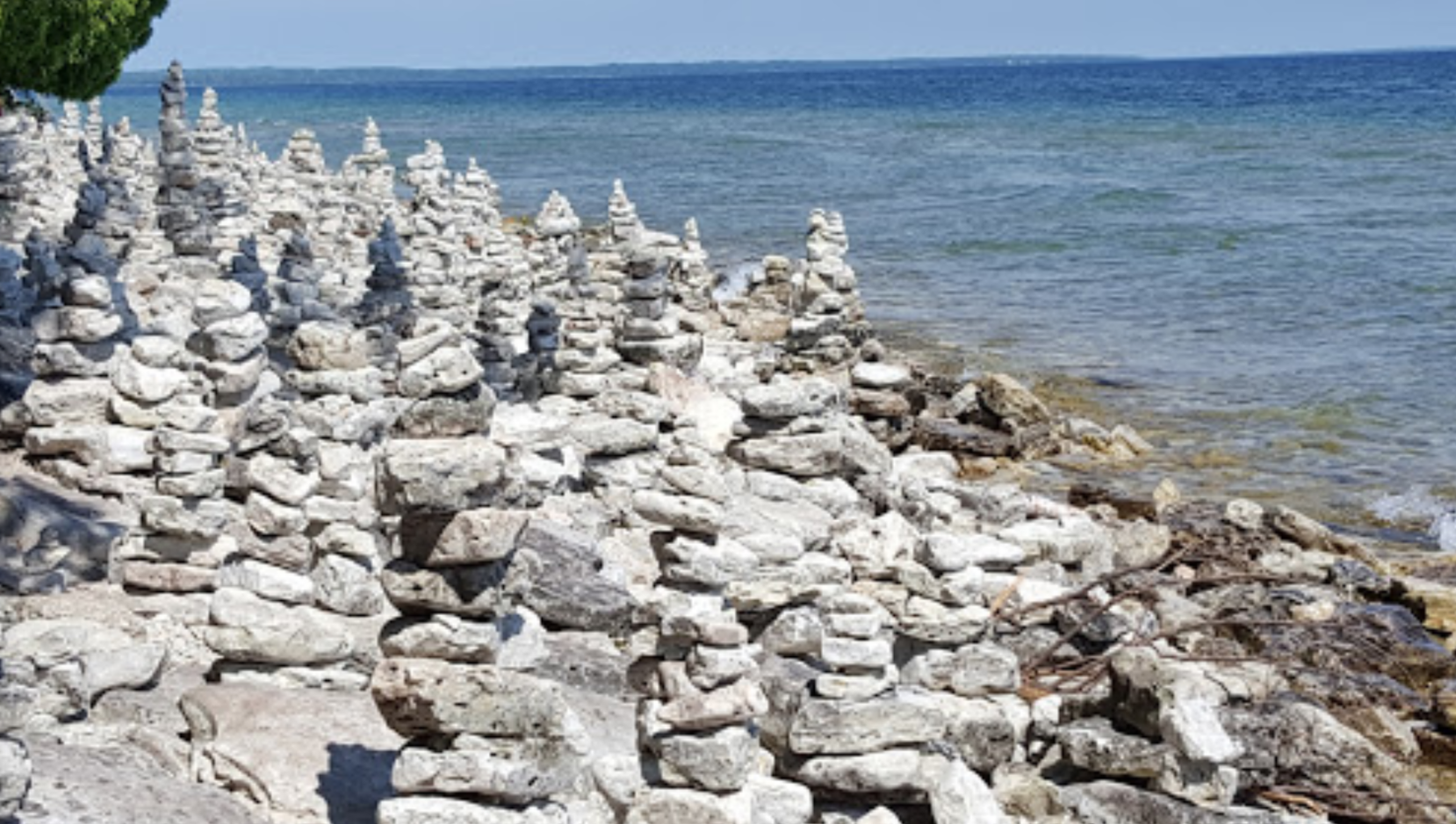 Off the Beaten Path Vacations 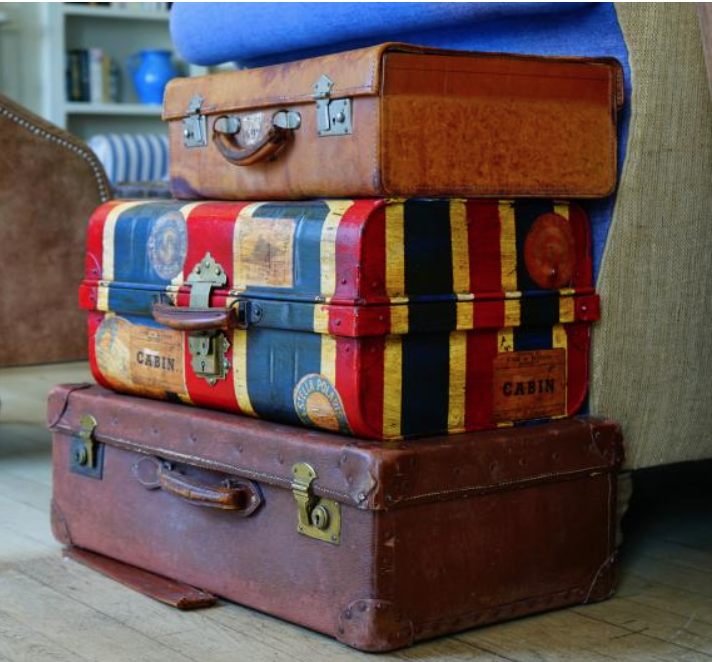 How to Pack For a Road Trip