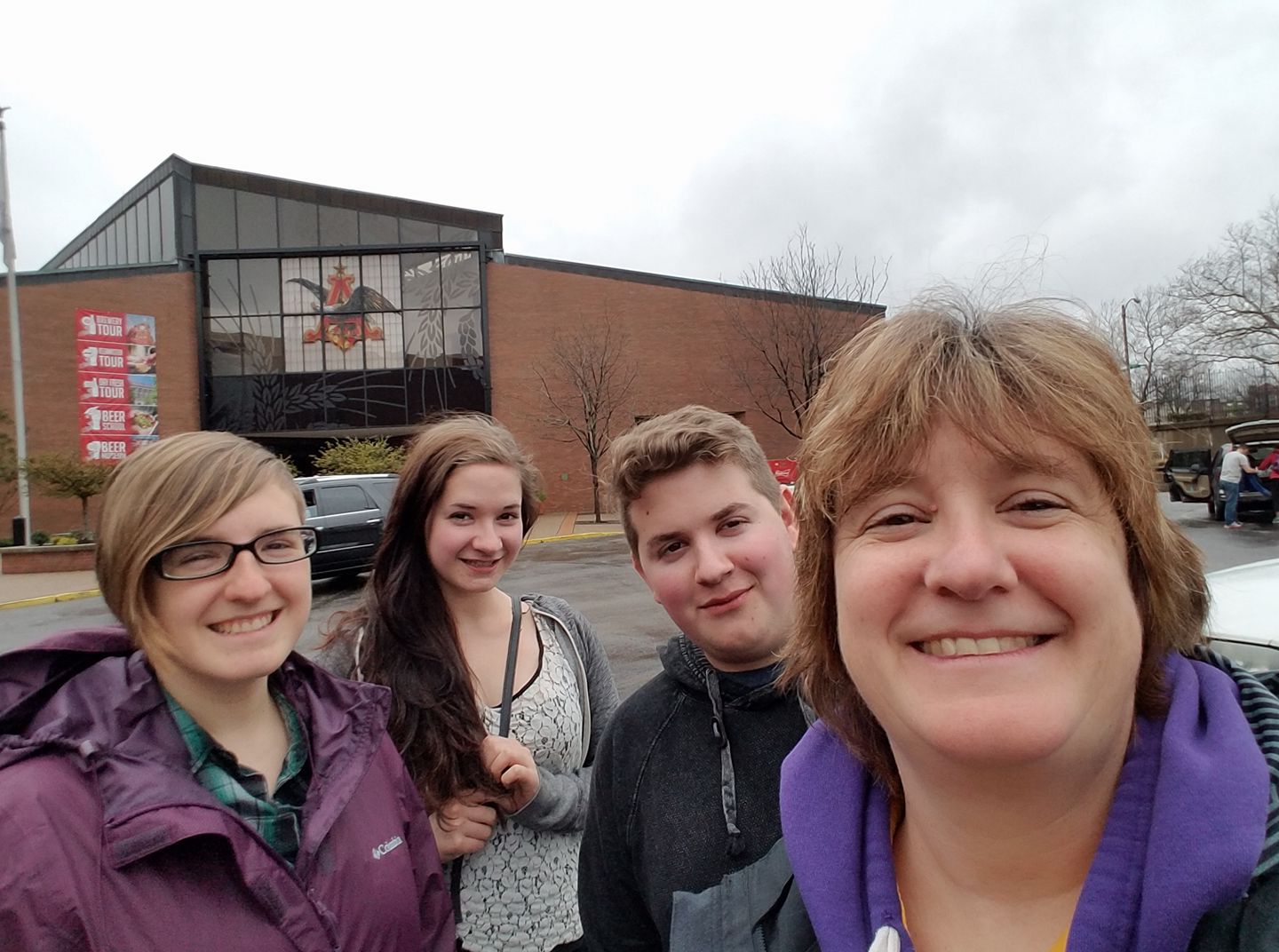 Finally, here is Part 2 of our St Louis trip during Spring Break!  I am in the process of selling a rental house.  The renters moved out April 4th and I have been crazy busy cleaning, fixing, painting, etc!  The best thing about it is that, after all is said and done, I will no longer be a landlord – Yay!  However, a lot of time and money needs to be spent to get to that point!  More on that later, here more on St Louis!  As you may remember, my oldest daughter moved to St Louis last November, my middle child, daughter #2 flew in from Seattle, and my son and I drove down from Stoughton Wisconsin to all hang out together.  Here are the second part highlights from that trip.  If you missed the first post, here it is!

Monday morning was a busy morning of shopping to stock up on things for daughter #1.  We grabbed salads and sandwich fixins at the grocery store for lunch, then we headed to our main destination of the day – Anheuser-Busch Brewery for the Day Fresh Tour we had booked in advance.  I highly recommend booking your tours in advance because when we arrived, all of the main tours were already sold out.  There is an extensive gift shop that will entertain you (and happily take your money!) while you wait for the tour to start.  The parking lot was full when we arrived, but we caught someone leaving on our second go-around.  Keep this in mind and arrive early enough to accommodate waiting for a space! 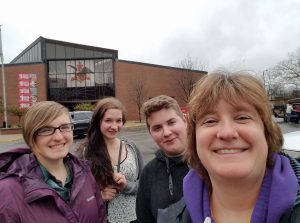 There was no line when we checked into our tour.  Our names were checked on the list and we received our tickets and told that the start would announce over the intercom.  We browsed the gift shop and bought some souvenirs (which we took out to the car) while we waited.  The Day Fresh Tour is the main general tour.  There is also a shorter Complimentary Tour that does not include beverages and a longer Brewmaster Tour that gets a more detailed look into the brewing process.  The Day Fresh Tour lasts about 75 minutes and gives you a view into the Budweiser Clydesdale Paddock & Stables, the Beechwood Aging Cellar, the historic Brewhouse, the Packaging Facility, and more.  They give a lot of great historical information about the brewery and insight into the unique brewing process that makes a Budweiser beer what it is.  For guests 21 and over, there are two samples provided on the tour and a token that can be exchanged for any beer in the Biergarten after the tour.  There is also an opportunity to get more tokens by answering some trivia questions along the way, so at $10/guest for over 21, it’s a great deal.  Guests 3-20 are only $4 and children 2 and under are free.  Rating 5/5.

The Biergarten is a bar and grill located at the brewery.  You can exchange your tokens for anything they currently have on tap.  They have all of the ‘usual’ suspects of the Anheuser-Busch brands (of which, there are many!) and usually have a few of their Limited Release beers as well.  We weren’t that hungry, so opted for sharing some wings and a Wedgehead Board.  The burgers and sandwiches being served to others looked appetizing and seemed to be appreciated.  Overall, service and quality of the food is very good, however we did need to wait for drink refills.  Rating 4/5 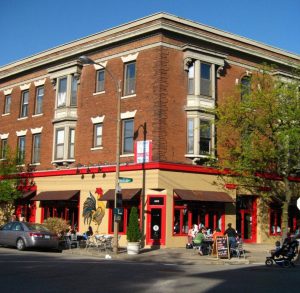 After the brewery, we headed back to my daughter’s apartment for conversation and card games.  We ordered take-out pizza from PI Pizzeria Central West End.  PI Pizza had its start as a St Louis food truck in 2008 and has since expanded to Washington DC and Cincinnati OH.  According to their history, President Barack Obama is a fan! Parking was a little challenging – I needed to park about 1.5 blocks away, but the pizza was hot and tasty.  Not too much crust, not too much sauce – just really good pizza.  Rating:  5/5

It was still cloudy and rainy Tuesday morning.  Originally, we had planned to take a hike at Cliff Cave County Park near the Mississippi River.  We decided the trail was probably too wet and muddy to enjoy, so we decided to go to a movie and mini-golf instead.  This is what traveling and especially roadtripping is all about – remain flexible and take it all in stride, because sometimes circumstances cause plans to change!

We started out our morning by sleeping in and then walking a couple of blocks to the nearby Starbucks for coffee.  The place was busy and as expected for a Starbucks.  With coffee in hand, we walked back to the hotel and headed downtown for an early lunch. 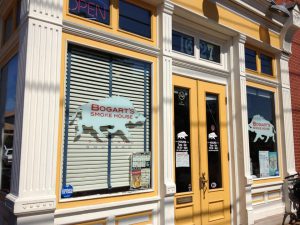 For lunch, we decided to go to Bogart’s Smokehouse.  This is one of those BBQ joints where you have to show up early if you want the full selection – they do run out!  It’s locally owned and is some of the best BBQ you will ever have!  The venue has you form a line to order your food and there is always someone there to get you a table as you’re working your way through the line.  Seating is limited, but they always seem to make it work.  I can never decide what to order, so I always get a combo basket of some kind.  This time it was brisket and turkey.  YUM!  Everyone thoroughly enjoyed their lunch – and, as always, we had to bring home left-overs. Rated: 5/5.

After lunch we headed to Putting Edge – St Louis.  This is an indoor, black-light miniature golf course located in an outlet mall on the west side of St Louis.  The outlet mall itself is somewhat of a ghost town – seems like an investment gone wrong – but the minigolf course was clean, had fairly good challenges, and was fun to play.  We were the only ones playing on an early Tuesday afternoon, so we could relax and just have a good time.  Not the best minigolf course, but entertaining enough.  Rated:  4/5.

We rounded out the rainy afternoon by going to see Beauty and the Beast at AMC Esquire.  Parking was behind the building and it was a little strange as there was no door to get in from the back.  We ventured down a sketchy alleyway to get to the front doors.  I was glad it was day time when we went, otherwise, I’m not so sure I would have gone that way.  There weren’t any signs to indicate which way to go, so that would be an improvement.  The theater itself was fine.  They had the stadium seating which I prefer now for movie watching and one of the reasons we selected this theater.  Popcorn and drinks were as expected.  The movie was entertaining.  The special effects were amazing and the storyline followed the animated version very closely.

After the movie, we were a little hungry, so we walked over to Mike Duffy’s Pub and Grill  which was just across the parking lot.  This place was quiet – but it was a Tuesday afternoon after all.  We ordered some drinks and appetizers.  Nothing to write home about, but was good pub grub.  Rating:  4/5. 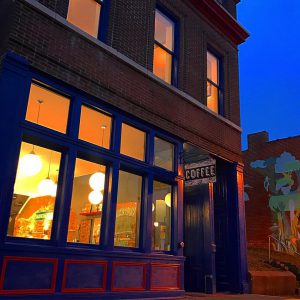 Wednesday morning we met Tara and the little boy she nanny’s at Rise Coffee.  This unique coffee shop offers “sustainably crafted, local specialty coffee, our own baked goods, and Chef Scott Davis’s meticulously assembled plates.”  It is located in a historic building in the trendy Grove community of St Louis.  On the second floor is extra seating and a special gated play area for kids with toys and a fort.  The breakfast sandwiches and pastries were very good and the coffee was top notch.  Rating: 5/5.

My impressions of St Louis are positive overall.  While the city struggles in certain aspects – there are obvious run down neighborhoods and areas for improvement – it also has many unique neighborhoods and things to offer it’s citizens as well as visitors.  There is plenty to see and do for nature lovers as well as city lovers, fabulous local restaurants, friendly people, and ‘off the beaten path’ type of gems to discover.  We will definitely enjoy visiting my daughter while she calls St Louis home.  Stay tuned for future adventures and feel free to contribute your own St Louis experiences! 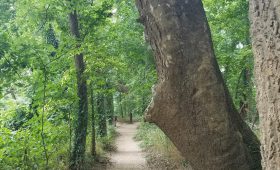